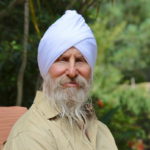 Kundalini Yoga Meditation Techniques Specific for the Treatment of Psychiatric…

David Shannahoff-Khalsa is the Director of The Research Group for Mind-Body Dynamics at the University of California San Diego's (UCSD) BioCircuits Institute, and a member of the UCSD Center for Integrative Medicine. Prior to coming to UCSD in 1994 he spent 23 years at the Salk Institute for Biological Studies in La Jolla, first working on the building blocks of the genetic code, and then pioneering novel studies in the neurosciences. He has discovered a novel step in the evolution of the nervous system that gives new insights to mind-body (psychophysiological) states and how to control these states and to better treat psychiatric disorders. He has published widely in peer-reviewed scientific journals and conducted three clinical trials using Kundalini Yoga meditation techniques for treating obsessive compulsive disorders and OC spectrum disorders, and pioneered the use of whole-head magnetoencephalography brain imaging to study these and other yogic meditation techniques. He has presented and taught Kundalini Yoga Meditation for treating psychiatric disorders at the American Psychiatric Association Annual Meetings 13 times (including 11 Full Day 6 hour Continuing Medical Education courses) since 2003 for a wide range of psychiatric disorders.

He has written four books that include 100+ different meditation techniques and multi-part disorder-specific protocols for all of the major psychiatric disorders. His 3 books published by W. W. Norton & Co., Inc. include:

David's primary efforts involve his research on treating psychiatric disorders using Kundalini Yoga Meditation protocols. He has also been involved in numerous brain imaging studies using both MEG & EEG. He also sees private clients in person or by Skype, and he teaches groups on the use of his psychiatric disorder-specific protocols, or other meditation techniques specific for stress management, or specific…