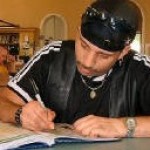 Robert M. Hensel was born with a birth defect known as Spina bifida. A disability that has not stopped him from achieving success in his life. Mr. Hensel is a leading igure within the disability community, advocating for the treatment and rights of all individuals living with disabilities across the globe. In 2000, realizing the need to focus more on one's abilities and less on their disabilities, Hensel sought to have a week designated that would bring to light the many talents and accomplishments being made by individuals with disabilities. Due to his efforts, Oswego county passed a motion recognizing Oct. 1-7 as Beyond Limitations week. In his own words, "I have a Disability yes thats true, but all that really means is I may have to take a slightly different path than you". Robert is also an International Poet-Writer with well over 900 publications published World wide. In 2000, Robert was nominated as one of the best Poets of the 20th Cen.…