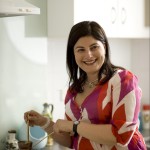 After completing studies at the Food Coach Institute in Australia, the business includes health & wellness coaching. She is also the author of two cookbooks titled “My Greek Family Table” (Penguin/Australia), which won the prestigious Gourmand World Cookbook Awards – Best Mediterranean Cuisine Book in Australia 2009 and “Cooking & Eating Wisdom for Better Health” (BALBOA). Maria also released an eBook titled “A Greekalicious Feast” and is available on Amazon for Kindle, Barnes & Noble for Nook and the Apple iBook store for iPad. Maria has a new book/ebook coming out in May 2017 titled "My Greek Family Table". A book of Greek recipes alongside ancient Greek healing Health wisdom.

In 2014 Benardis moved to New York City to expand the Greekalicious brand and to share her wisdom and passion about Greek cooking and its ancinet Greek healing wisdoms across America. Maria also teaches at the Natural Gourmet Institute, Havens Kitchen and The Brooklyn Kitchen.
Maria is an expert on the adoption and practice of the ancient Greek wisdoms and philosophies on life, eating and cooking and how these lead to a happy and healthy life.