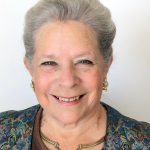 “The Miracle Worker...of Education and Parenting”: This name was given to me many years ago because I have mastered Positive Respect, and my results with kids can seem miraculous.

After completing my B.A. in Anthropology, I went to India and ended up enrolling in the Indian Montessori Training Course, where I was trained and certified in the Montessori Method by Mr. A.M. Joosten, who had lived and studied in Dr. Maria Montessori’s household from the age of 14. He asked me to stay on the year after the Training as an Assistant to the Course.

In 1973 my husband and I returned to the United States and founded a Montessori school called Children’s House. We decided to incorporate and Beginnings Incorporated, a nonprofit community service organization, was formed. Then I got State of California funding for Children’s House.

I had three children and remained as head teacher at Children’s House for 15 years. When I was invited to start Community Educational Centers in India, I realized that I needed to share what I had learned about being respectful to kids with my community.

In 1992 I wrote what turned into my first book: Friendly Families. The fourth version, an ebook, Good Parents Good Kids came out in 2016.

Here’s what some people have had to say about this book:

“An easy-to-understand book that gives a bundle of ideas and communication skills for building families that function peacefully and foster the kind of kids every parent wants.”
Dr. Thomas Gordon, Author, P.E.T. Parent Effectiveness Training

“My children are so nice now!” A mother of four, approached me at the Summer Arts Fair. She wanted to thank me for writing Friendly Families and the Power of Respect. She had purchased it the year before, at the previous Summer Arts Fair. Then she implemented what she had learned in this book. She and her children were delighted with the results.

Besides writing, I give workshops, classes, spoke on the radio and wrote for a…

Registered Trainer with the Nevada Registry, the host of Nevada’s Early Care and Education Professional Career Ladder, the Registry collects, validates and warehouses the professional and educational achievements of early childhood educators throughout the state.

I am dedicated to helping all of our kids grow up happy.